Will the Housing Boom Continue Despite Rising Rates? Look to Doug Ford for the Answer. 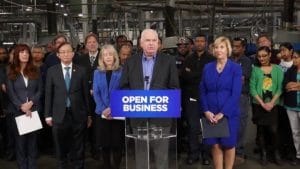 When Toronto Sneezes, London gets a Cold.

All too often mortgage analysts, economists, and political commentators provide a rather simplistic view of the housing market and interest rates (I am guilty of it too). In its most simplistic form, as mortgage rates go up, demand for home ownership goes down, with prices soon to follow. Indeed, many have been predicting the fall of housing prices nation-wide following last week’s announcement that the Bank of Canada had once again raised interest rates.

Yet as most economists will tell you, even while offering prescriptive analyses, is that it is the external factors not considered which keep them up at night. While we might assume that there is a direct relationship between interest rates, demand, supply and housing prices, all-too-often there are other factors at play, which punctuate this seemingly coherent relationship. So what could possibly punctuate the near symbiotic relationship between interest rates and demand for housing? To understand this question we need to look at what Doug Ford has done since taking office

What he Said he was Going to Do

Since taking Office Ontario Premiere Doug Ford has largely implemented the policies that he said he would while on the campaign trail. From rolling back Ontario’s sex ed curriculum, freezing the minimum wage hike, cancelling the Cap and Trade system, to getting ride of the CEO of Hydro One, Premiere Ford has largely done what he promised prior to Election Day. Political considerations and the wisdom of these policies aside, we have observed an apparent willingness on the part of Premiere Ford to do what he said he would do.

To much criticism, especially given the massive cuts to spending, it was unveiled last week that Ontario would be placing “Open for Business” signs at border crossings throughout the Province. While at first glance these are just signs, they point to a larger tenancy on behalf of Ford to follow the Conservative model of laissez-faire economics, keeping the government out of the economy. Indeed, the larger point of these signs is that Ontario will be friendly toward business (read less regulation).

Great, what about Housing Prices?

In understanding that Ford is doing what he said he was going to do, combined with the fact that he appears to be following a model of economic management that keeps the government out of the economy, we can start to see how housing prices may continue to rise despite the rise in interest rates.

In a June Blog Post I wrote about how then-Candidate Doug Ford’s promise to repeal the foreign buyers tax could keep housing prices rising despite government intervention, especially for those living in London. Indeed, while the Bank of Canada can continue to raise mortgage rates in an effort to cool both the economy and the housing market, here in Ontario, what happens in Toronto effects everything else.

As we saw in the summer of 2017, a rise in Toronto’s home prices will lead to an even greater rise in the price of London’s homes. While Foreign Buyers come into Toronto with more Cash than their Toronto counterparts, so too do Toronto residents come into London with more cash than their smaller-city cousins. Just as in 2017, this will lead to a further rising in London’s home prices.

Given that Premiere Ford has followed through on his previous campaign promises, it is only logical to assume that he will continue with his plan to repeal the Foreign Buyer’s Tax. This would further keep in line with his policy of ‘Open for Business,’ allowing the market to work itself out without government intervention.

Finally, as demonstrated with the Cap and Trade system, Ford has shown a willingness to thumb his nose at the Federal Government’s initiatives to set policy for the provinces.